At Running River rug cleaning we see so many rugs. Each with it’s own pattern. The most common pattern is a central medallion with a lesser pattern on the borders. Some say the medallion is like the mandalas of Buddhist theory that offer the owner some means of spiritual protection.

Mandala (Sanskrit Maṇḍala, ‘circle’) is a spiritual and ritual symbol in Indian religions, representing the universe. The basic form of most mandalas is a square with four gates containing a circle with a center point. Each gate is in the general shape of a T. Mandalas often exhibiting radial balance.

The term appears in the Rigveda as the name of the sections of the work, but is also used in other religions and philosophies, particularly Buddhism. 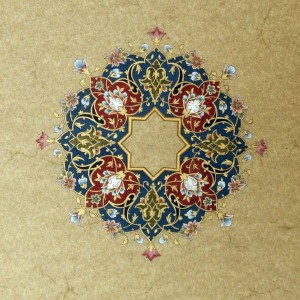 al traditions, mandalas may be employed for focusing attention of practitioners and adepts, as a spiritual guidance tool, for establishing a sacred space, and as an aid to meditation and trance induction.

In common use, mandala has become a generic term for any diagram, chart or geometric pattern that represents the cosmos metaphysically or symbolically; a microcosm of the universe.

Medallions are the common motif for Persian rugs. Yet, even if two carpets have basically the same design, no two medallions are ever exactly the same. Some experts believe that the medallion designs stems from the very religious nature of the weavers and that their inspiration probably came from the artwork and patterns of domes of the mosques. One typical Oriental rug design uses a medallion, a symmetrical pattern occupying the center of the field. Parts of the medallion, or similar, corresponding designs, are repeated at the four corners of the field. The common “Lechek Torūnj” (medallion and corner) design was developed in Persia for book covers and ornamental book illuminations in the fifteenth century. In the sixteenth century, it was integrated into carpet designs. More than one medallion may be used, and these may be arranged at intervals over the field in different sizes and shapes. The field of a rug may also be broken up into different rectangular, square, diamond or lozenge shaped compartments, which in turn can be arranged in rows, or diagonally.

In Persian rugs, the medallion represents the primary pattern, and the infinite repeat of the field appears subordinated, creating an impression of the medallion “floating” on the field. Anatolian rugs often use the infinite repeat as the primary pattern, and integrate the medallion as secondary, Rug design can also be described by how the surface of the rug is arranged and organized. One single, basic design may cover the entire field (“all-over design”). When the end of the field is reached, patterns may be cut off intentionally, thus creating the impression that they continue beyond the borders of the rug. This feature is characteristic for Islamic design: In the Islamic tradition, depicting animals or humans isprohibited even in a profane context, as Islam does not distinguish between religious and profane life. Since the codification of the Quran byUthman Ibn Affan in 651 AD/19 AH and theUmayyad Abd al-Malik ibn Marwan reforms,Islamic art has focused on writing and ornament. The main fields of Islamic rugs are frequently filled with redundant, interwoven ornaments in a manner called “infinite repeat”, The Medallions represent the awakening.

The team of Running River are passionate, trusted and proficient rug cleaners. You can tell they are sincere rug lovers that treat your textile with the utmost care. I highly recommend them!

Running River Rug Cleaning is the best of the best. They’re the company that trained me, as well as a lot of others, in the art of fine rug cleaning.